OpenStreetMap (OSM) is a collaborative project used to create a free editable map of the world. OSM goes beyond an open alternative to Google Maps, but to potentially the canonical source for shared locations. GPS points are great for creating a dot on the map, but by selecting an OSM feature in your form, you have an advantage of referencing the location of the survey to a unique identifiable OSM geographical feature on a map such as a town, health facility or road with OSM instead of a GPS point.

OpenMapKit (OMK) is a third-party Android app that provides the capability to associate an OSM feature with your form to edit tags of OSM features. OpenMapKit integrates with ODK Collect similar to how a barcode question would activate a barcode application to capture the barcode. In this case, OpenMapKit will display an OSM map and allow you to select ways or nodes. During a survey, when a user gets to an OSM question, they will click on the launch OpenMapKit button. This will open OpenMapKit with an OpenStreetMap map. OMK will allow the user to select an OSM way (which could either be an open way, for instance a road, or a closed way, for instance a building) or node (a single point). Once the OSM feature is selected, the tags associated with the feature will be available for editing. The user can then make edits on the tags of interest accordingly or simply select the feature by clicking on the check mark. The OMK feature is then attached to the submission question as a file which includes the OSM XML of the selected OSM feature and tags associated to that feature.

Note: To use OMK, you will need to install the latest release of ODK Collect and the Ona version of OMK on your device. For more information about both tools, please see the following documentation for ODK Collect and OMK.

To use OMK, you will need nodes (i.e. points) or ways and a basemap. The points will be generated from an osm file. The basemap can be the Online Humanitarian OpenStreetMap, which requires an internet connection, or you can create your own basemaps, such as mbtiles, which allow you to collect data offline. Using your own basemap may require a large amount of storage on your mobile device. If the basemap is too large, you may need to break down your basemap into smaller mbtiles, and load corresponding section of a basemap to mobile devices individually that are collecting data in the associated location.

How to Author and Answer Questions Using OpenMapKit

How to add OSM questions to XLSForms

An OSM question is a new “media type” question. It functions in the survey in a similar manner as photo or video questions, the user is asked to launch the phone camera. In the same way, when OSM question is specified in a survey, ODK Collect opens/launches OMK, and it provides parameters for the tags to be entered for an OSM feature that is selected. 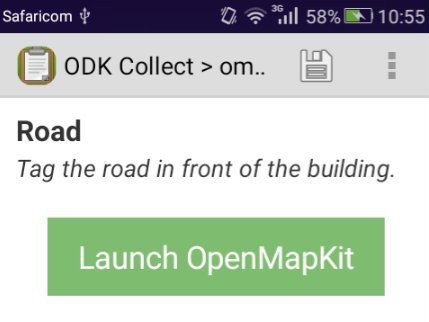 The following steps will show how to add an OSM question to XLSForm. The Basic OpenMapKit XLSForm is used as an example.

In your form, you will have an extra sheet called osm, different from the survey, choices and settings sheets. The osm sheet generally defines the tagging parameters that will be sent to OMK. On the survey sheet (as shown below), your reference question is named building_tags. In the type column, it has a parameter of building_tags. This parameter is referenced in the osm sheet.  The osm sheet defines only the tags you are interested in the OSM features. An OSM feature may have many more tags that you will not be interested in. It also may specify custom tags that you will want included in the OSM feature.

Step 2: How to add osm tags

As mentioned earlier, in the survey sheet, your osm_building question had a type parameter called building_tags. In the osm sheet, we have several rows with parameters of building_tags, or questions asked when OMK is launched, in the list name column. 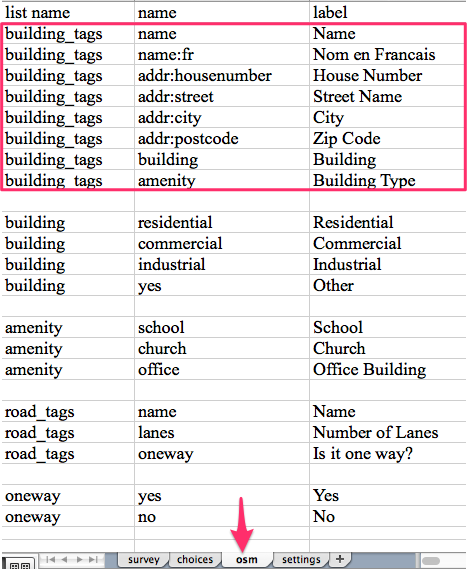 Here notice that one of the building_tags has a name called building. 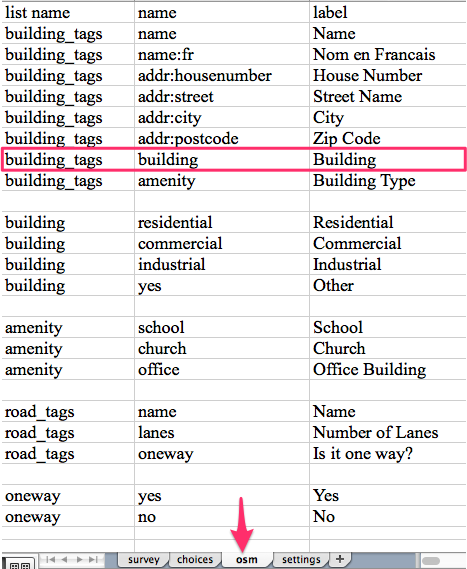 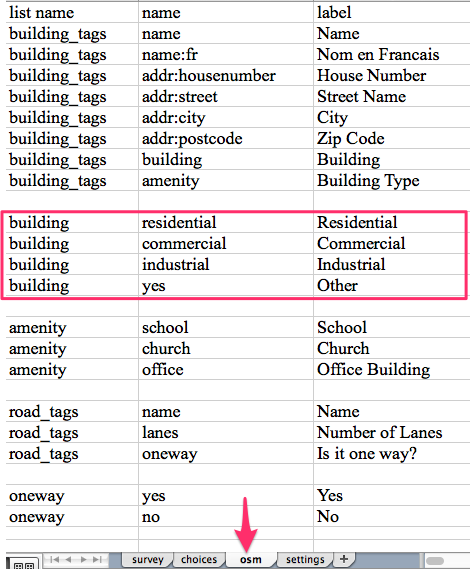 The multiple choice values for the building tags will appear on OpenMapKit as follows: 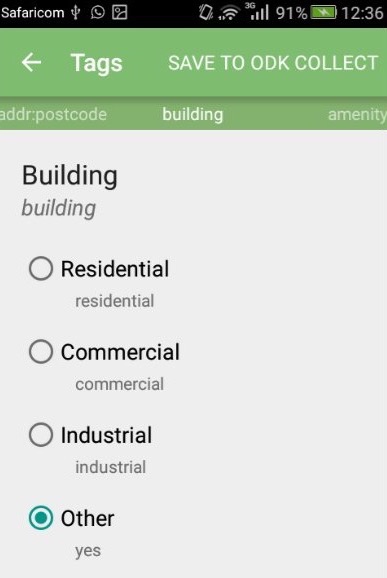 If you don’t provide multiple choices values for a tag (e.g. as for addr:street in our reference XLSForm) 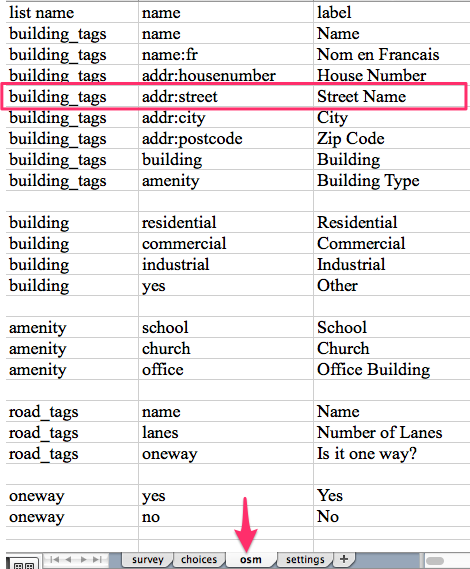 then, the user will be required to manually type in a value for a given question. On OpenMapKit, the question for the building tag where a user manually types in a value will appear as below: 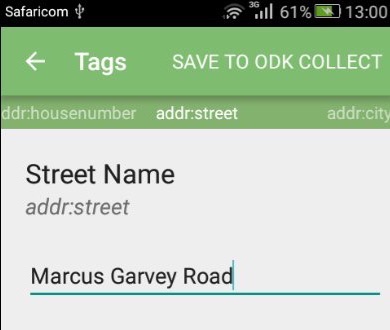 There are different ways that you can generate an OSM file. This section will cover one method, using a CSV file and JOSM:

Generate an OSM using the CSV

Add a version, changeset, and timestamp to your OSM file

How to copy OSM files to OpenMapKit App directory

In some situations, you can download files where there is network or a wifi connection. However, with our method used to generate the OSM files, user will have to manually add their OSM files to their mobile devices.

Below is a step-by-step procedure on how to add OSM files manually to your OMK App Directory folder located in your phone or tablet: 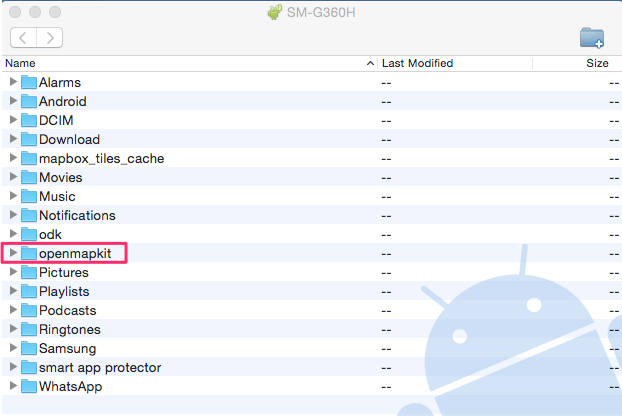 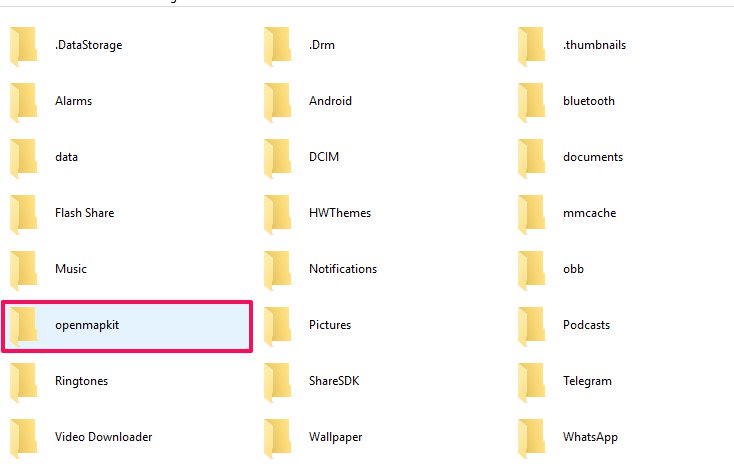 Below, you can see a step-by-step user interface (UI) iteration of an OSM form question. 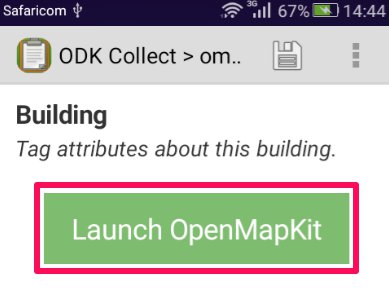 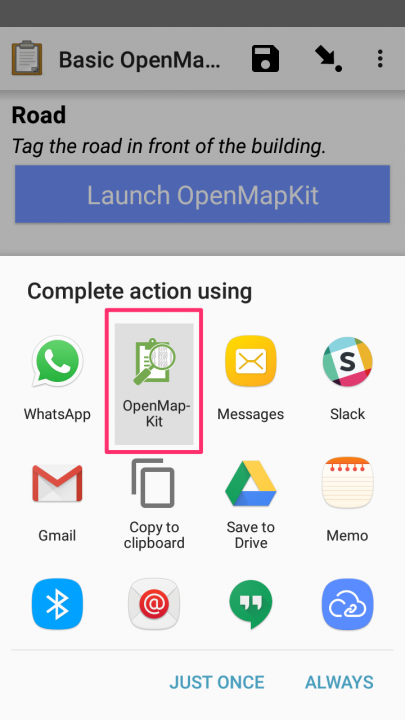 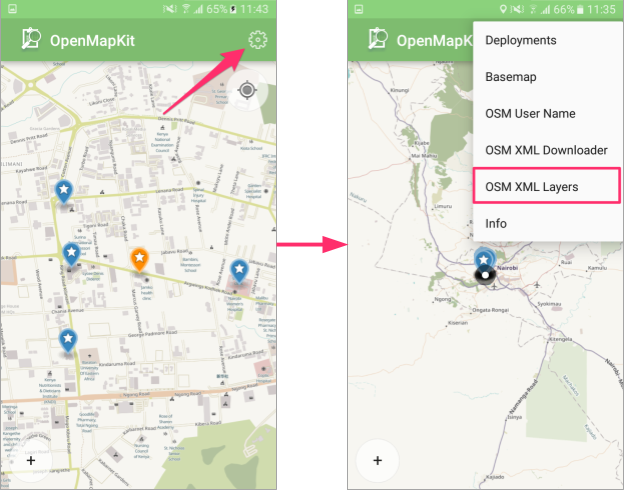 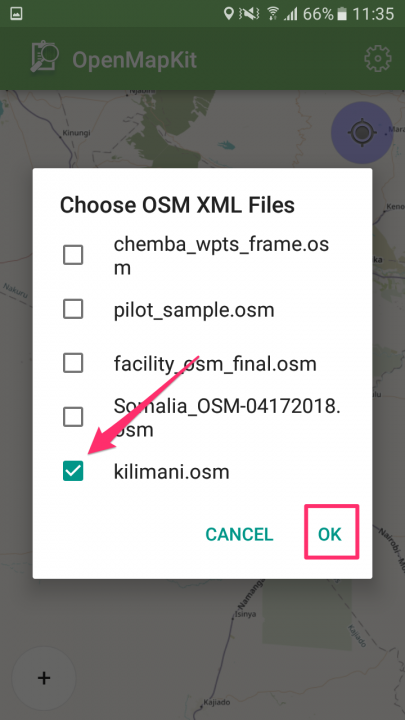 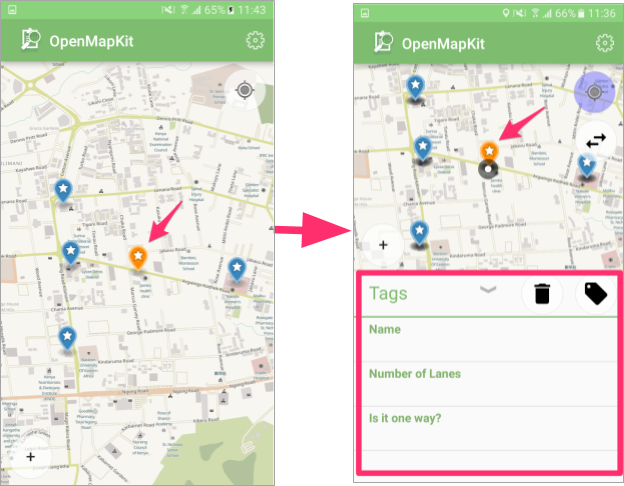 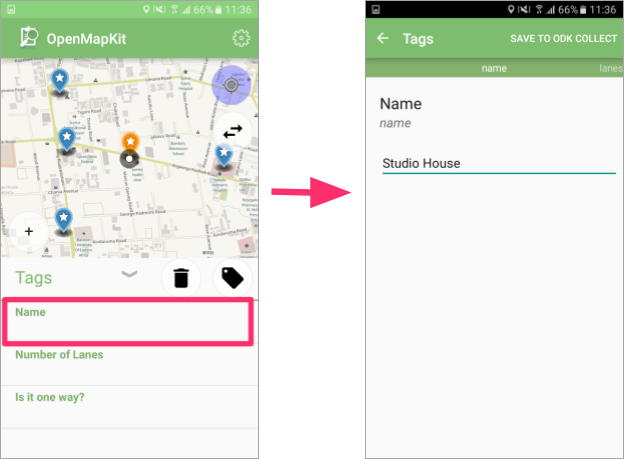 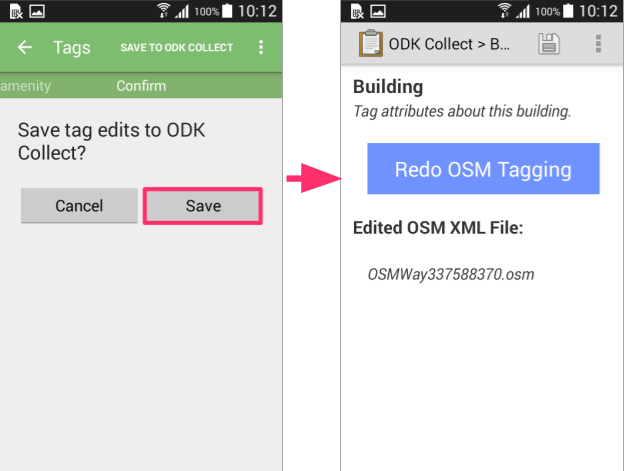 If you need to edit the tag again once you have saved it, you can select Redo OSM Tagging and repeat the previous steps.

Configuring the OpenMapKit settings and constraints

When the OpenMapKit is started for the first time, it creates a folder named openmapkit within the device files. The openmapkit folder has three sub-folders in it: osm, mbtiles and settings. These sub-folders are used to store files needed by the application.

When you use the Ona version of OMK, there are additional settings you can include, that are not available in the Google Play Store version of OMK. These settings include the following:

In a project which uses OMK to determine which houses in an area have received Indoor residual spraying (IRS), this feature allows you see which other house in the area have already been tagged by others. For example, the form to determine if the house received IRS is being used by 300 people, data is collected, and then all the data is submitted. When you use this feature, you would not want to fetch all the OSM data from the form, but you would probably want only a filtered portion of the data or it might be too much data. An example can be seen below.

In this specific element:

OSM allows you to collect points, or nodes, lines, or an open way, and structures, or closed polygons. You can only add points. This feature allows you to determine what a node will be called. An example is shown below, which essentially changes a node to be called a Water Point.

Certain options in the upper corner can be hidden. The default is all options are showing. The options to be hidden are phrased exactly as they are displayed in the menu and are case insensitive. An example can be seen below.

An example is shown below.

Normally, you can click on tags and it will show all tags, or you can go to a specific tag. If you click a middle tag, you would have to scroll back to answer previous tags and forward again. If you are utilizing the require constraint, you would not want them to click on a middle tag. This feature will turn off the capability to click any tag. It can be false or true, and it is case sensitive. You will want it be false, if you don’t want someone to click any tag, including middle tags. An example is given below.

The admin password prevents data collectors from doing certain “admin” tasks: collecting data when the GPS is off or changing the admin password. An example can be seen below.

There are two ways that Android device can collect geodata:

1. It directly connects to a GPS chip in the mobile device. An example is shown below.

You can include a proximity circle, which shows a circle around the point or structure. By default, this circle shows the GPS accuracy. The more accurate the GPS, the smaller the circle. However, some people prefer this proximity circle to mean the radius of which you are allowed to select points or structures, but the GPS Accuracy will still show in the upper left corner.

In this specific element:

An example can be shown below.

The settings are in JSON format. All setting files must be included in one file with the file name: omk-settings.json. An example of a settings files can be found here.

When you use the Ona version of OMK, there are additional constraints you can include, that are not available in the Google Play Store version of OMK. Most of the constraints are related to the tags, or questions for each point or structure, meaning the constraint has to be applied to each tag for it to be reflected on OMK. For example, multiple tags will have the same constraints. These constraints include the following:

And example is shown below. In this specific example tag:

Similar to hiding option in the settings, you can also hide tag. The default is false.

A structure tag, or question, can change from nothing to value, and then never be possible to tag again based on the value type of the tag. For example, using the IRS spraying again, if a structure is sprayed, you can prevent a person from selecting that structure again.

The value in the square brackets (“sprayed”) is the tag option, which when selected for the tag option spray_status, will mean that point or structure can not be selectable.

You can set certain point or structure tags, or questions, as required. The default is false.

There are additional constraints that one can include. These can be found on the OMK constraints page.

Once you have developed your settings and constraint files, you will want to upload them as media files on your OMK form.