This guide will show you how to create and manage forms using the XLSForm syntax.

What is an XLSForm?

XLSForm is a syntax used to author forms using a spreadsheet program such as Excel or Google Sheets. It is a practical standard for sharing and collaborating when creating forms. The XLSForm syntax is human readable, so it is easy to learn and use. As the name implies, XLSForm files are saved as .xls or .xlsx files for import into Ona Data.

Why does Ona use XLSForms?

Ona Data uses XLSForm because it makes it easy to create, collaborate and edit forms of any length or complexity. It’s also easy to work from previously-made forms, saving time and letting you share your form easily.

How should I get started authoring XLSForms?

We recommend that you start with the basic form tutorial. You can also watch the XLSForm Authoring video. Next, if you already have a form you want to create, you can start authoring using XLSForm.org for reference and asking questions you have on the Ona Community Support Forum.

We’ve also provided several starter XLSForms to give you a sense of the possibilities and give you a place to start if you are authoring a similar form. Another option for starting from an existing form is using a form that you have access to on Ona. You can download an existing form by going to the form’s Settings page, clicking on the Form Info tab, then selecting Download XLSForm from the Source dropdown menu.

These are three useful tips that the designers should be aware of:

For this tutorial we will be using the following survey:

To write a simple form, each Excel workbook usually has two main worksheets: survey and choices. The survey worksheet gives your form its overall structure and contains most of the content of the form. The choices worksheet is used specify the answer choices for multiple choice questions. Each row in this worksheet represents an answer choice.

Adding media files, such as image, audio, or video to your XLSForm can add context to your questions and provide visual and audio support to surveyors or surveyees. You can add the following media files to your form:

An example of a form with media files is the Bird Watching survey. Respondents are asked to select which bird they sighted from a list. A picture of each bird species is included next to the bird name to help the respondent verify their selection as shown in the screen shot below. 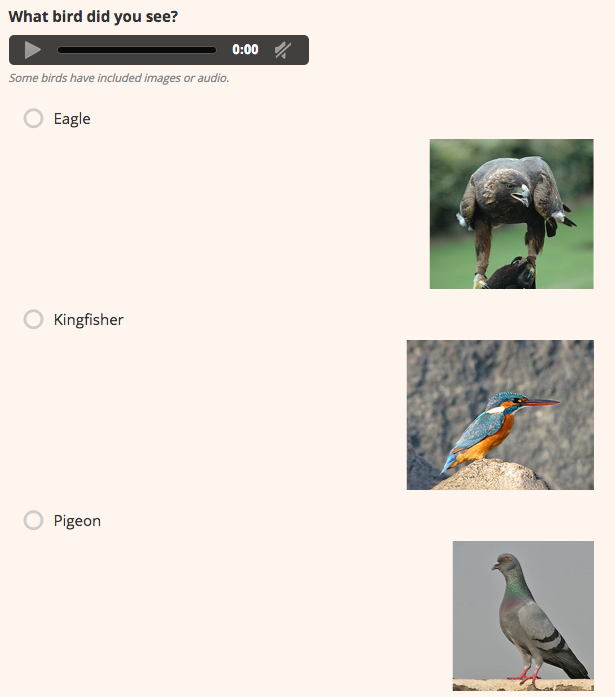 The survey worksheet from this XLSForm is shown in the screen shot below: 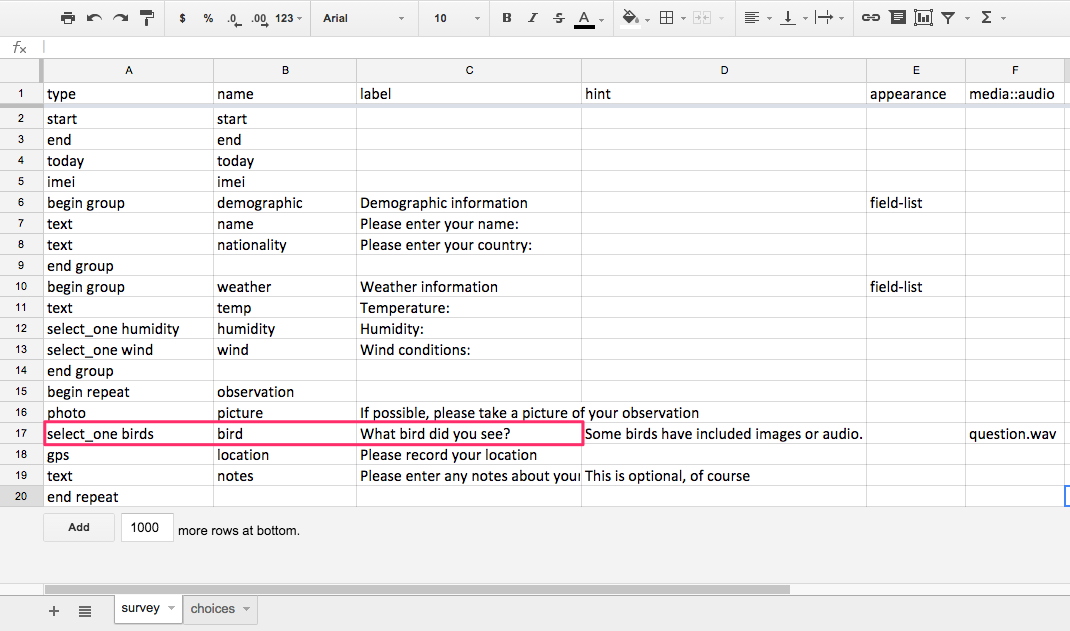 The choices worksheet can be seen in the screen shot below: 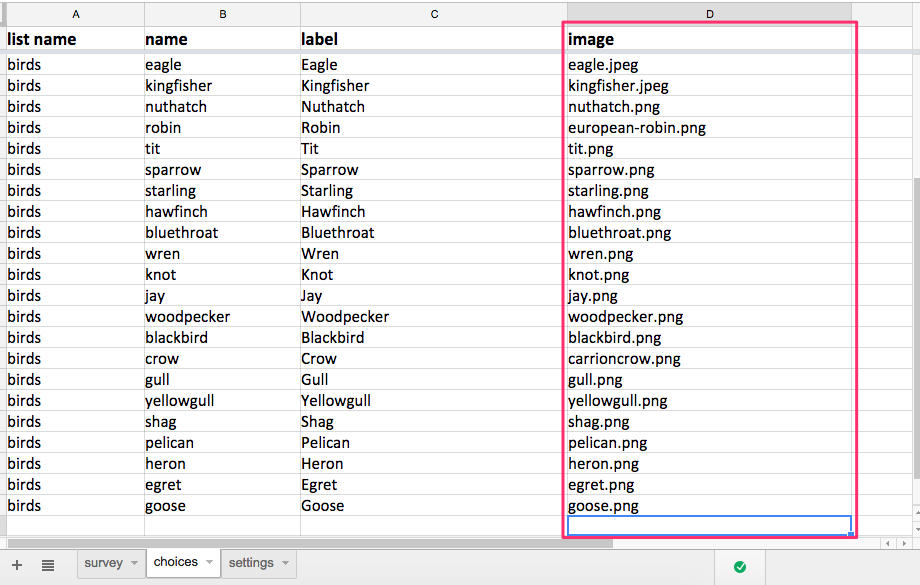 If you wanted to include audio or video in your form, then you would simply add separate media::audio and media::video columns to your form and add the corresponding audio and video file names in those columns. Media files can be added to questions in the survey tab of your XLSForm in addition to answer choices in the choices tab.

In addition, if your survey has multiple languages, you will need to have separate media columns for each language by appending ::language to the media columns. For example, to add image media files to a survey with both English and Swahili languages, you would add the following two columns to your XLSForm:

Where do I put media files that I want to add to a form?

In order for media files to be displayed in the form, the media files need to be uploaded to the form on your Ona Data account.

Once you have successfully authored your XLSForm, you can upload it to your desired project on Ona Data. After uploading, you can preview the webform. Read more on the various ways of uploading XLSForms here.

Forms uploaded to your Ona Data account can be replaced using the Replace Form option in the form’s dropdown menu. You can to replace a form that has no submissions as explained in this guide. Ona also supports replacing a form that has submissions.

Note:
In order to replace an existing form on Ona Data, the form id’s must be the same. If you must change the form id on the updated version, then you will need to upload it as a new form.

An inactive form cannot receive any submissions, and inactive forms do not show up in the list of forms available to download when using ODK Collect. Essentially, making a form inactive archives the form and helps prevent any changes from being made to the form or its data.

Making a form inactive is a good option when data collection has finished, as it prevents users from making changes, and the inactive form and its data will be stored on Ona Data indefinitely. It is also a good alternative to deleting a form from your account. Data contained in an inactive form will still be available in your account and can be accessed by making the form active once again.

You can make a form inactive one of two ways; i.e. when uploading your XLSForm and from the form’s drop-down menu.

When uploading your XLSForm

When uploading your XLSForm, you can choose Inactive from the form upload verification window. 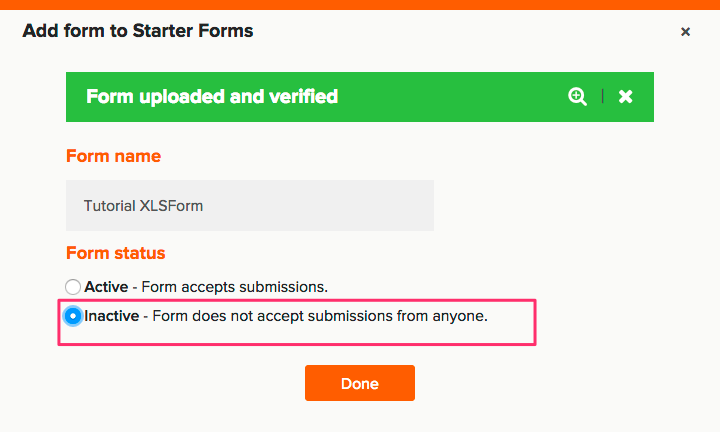 From the form drop-down menu

Forms already uploaded to your Ona account can be made inactive using the Make inactive option in the form’s dropdown menu as highlighted in the screeen shot below; 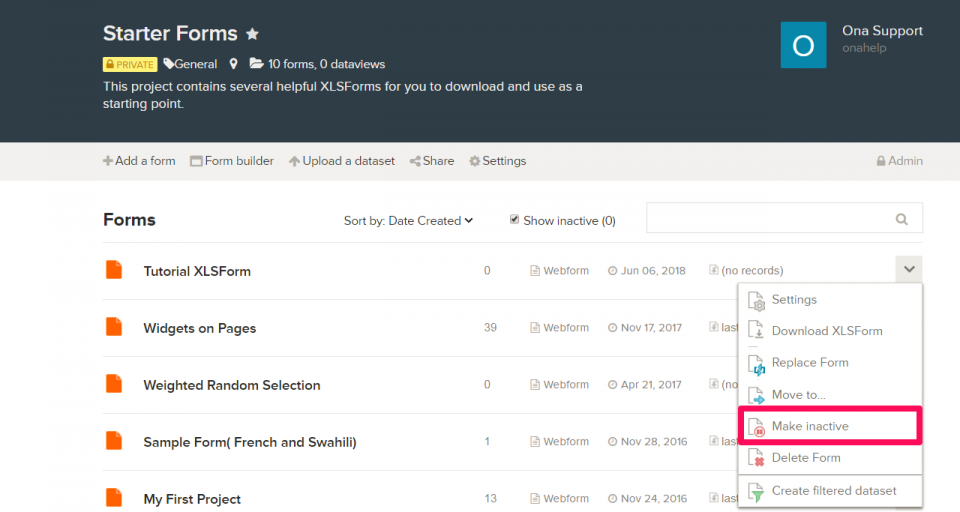 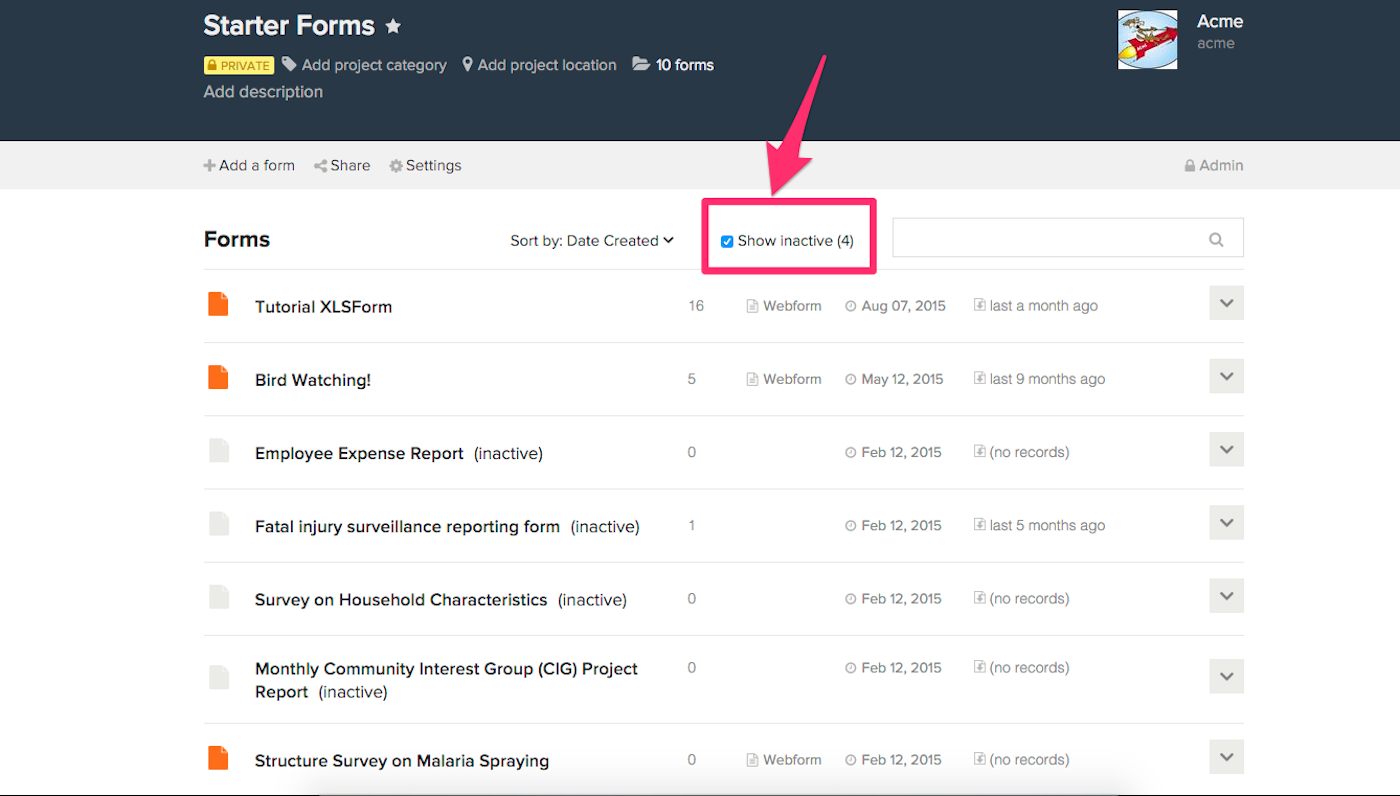 If you don’t need to see all the forms including the inactive forms, you can turn off by clicking on the Show inactive checkbox, inactive forms will no longer be revealed:

To make inactive forms active again, ensure the Show inactive checkbox is selected then from the inactive form’s dropdown menu, select the Make active option as shown in the screen shot below; 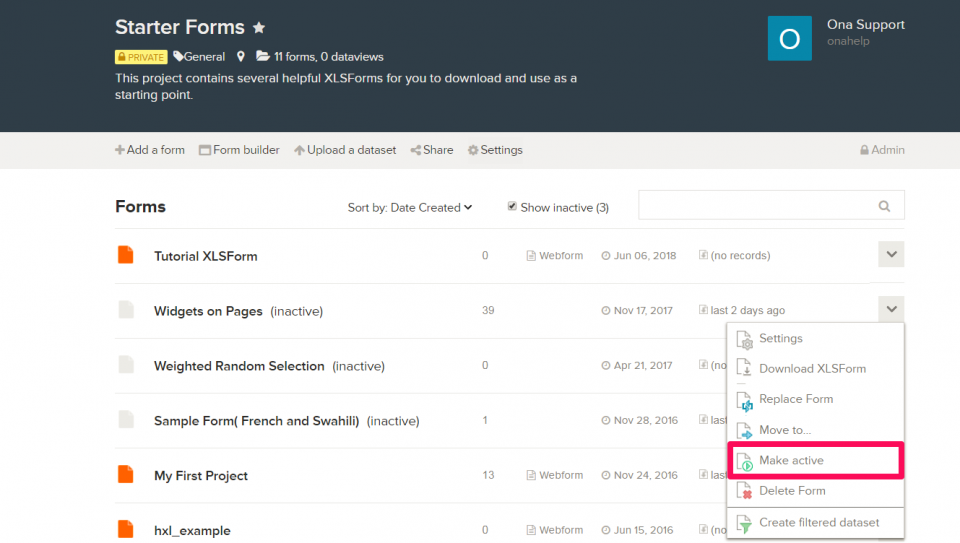 Forms uploaded to a project can be moved to a selected project as long as you have add form permissions in that project.

To move a form to different project:

To Delete a form: 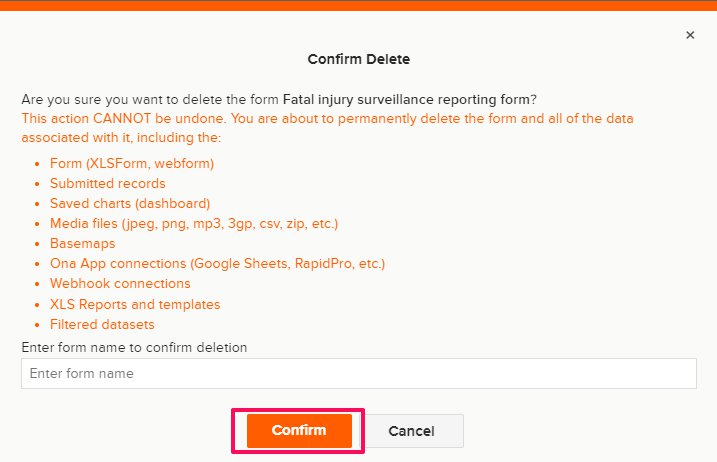 Note:
Deleting a form cannot be undone. Once a form is deleted, the form and any data already submitted or uploaded to the form will be gone and cannot be recovered.