There are two options that Ona users have for data collection: Enketo Smart Paper and ODK Collect.

Enketo is a web application that works on any modern web browser (although we highly recommend Chrome), while ODK Collect is an Android application that can be installed on any Android smartphone or tablet device.

Both Enketo and ODK Collect work offline, meaning that users can launch forms and collect and save their data without an internet or data connection.

Enketo is a lightweight web application that is used for data entry in Ona. Enketo forms, also known as webforms, launch in your computer or mobile device’s web browser. Along with ODK Collect, Enketo is a major component of Ona’s ecosystem that, together with XLSForm authoring, provides a complete solution for collecting data and sharing information.

Enketo has the following key features:

Once you have successfully added a form to your Project on Ona, you can immediately open it in Enketo webforms and start collecting data following the steps below:

From the list of Forms in your Project, select the Webform icon next to the name of the form you wish to open.

You can also open the webform at any time from the form data page.

The webform will open in a new browser tab. 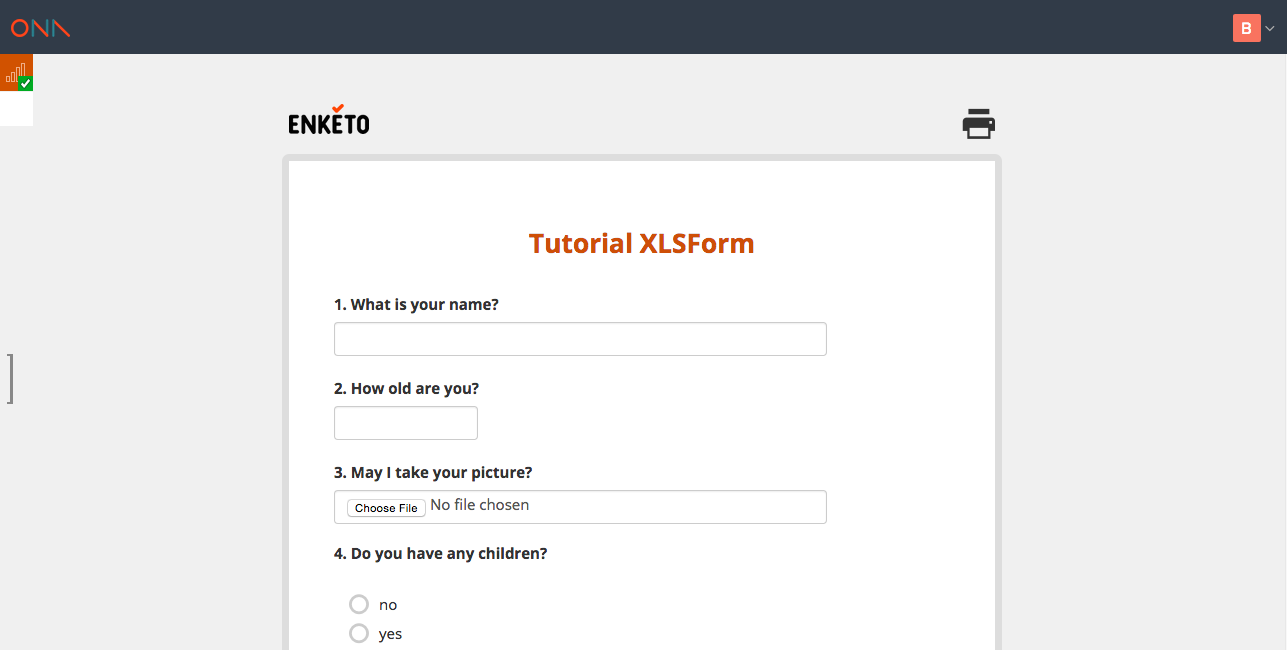 If this is the first time you are opening the form, make sure you bookmark it for easy offline access. In Chrome, you can do this by going to the Bookmarks menu and selecting Bookmark This Page…

These are the records that are stored inside your web browser until there is an internet connection and they can be uploaded to the server. They remain there even if you go offline or if you shut down your computer or laptop.

Queued records can be seen on the webform’s side bar with a list of records and their upload status. 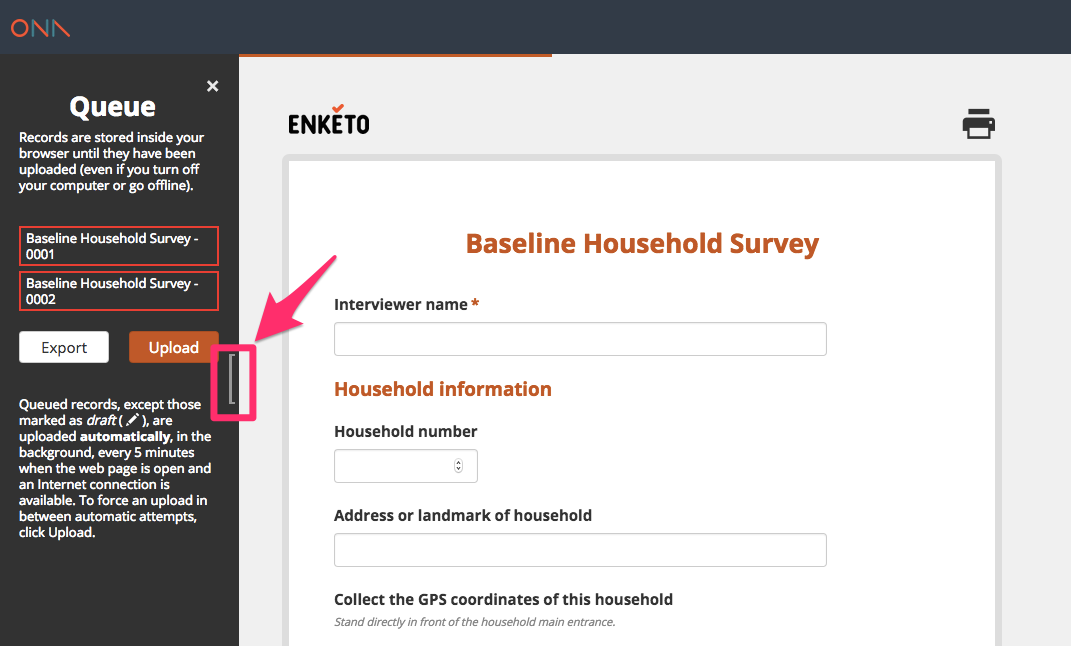 Note:
It is highly recommended, however, that you do submit or export your saved form records as soon as they are finalized. If your browser data is cleared before you are able to submit or export your saved records, you risk losing your data. Be especially cognizant of this if you are not using a personal laptop or computer, as many public desktops have pre-installed software that intermittently clears website and browsing data from the computer, which would erase any saved records you have stored in the web browser.

To reveal the queued records:

Queued records are uploaded automatically in the background, every 5 minutes when the web page is open and an Internet connection is available.

To force an upload in between automatic attempts, click Upload as shown below:

If you are not ready to submit your form, you can save the form as a draft that you can open and edit later.

To load the draft record:

Note:
When a record is saved without marking it as a ‘draft’, it is considered cleared for uploading as soon as a connection is available.

ODK Collect is used to collect the data on a mobile device and send it to an aggregate server such as Ona.

Ona being a mobile data collection tool uses ODK Collect to download already designed surveys and allow submission of the finalized forms back to Ona. For one to be able to use ODK collect, they need to install the application on an Android device.

Below are steps that can be followed to install ODK collect:

After installing ODK Collect, the next step is to configure the application to your Ona account. The Url https://odk.ona.io must be given to ODK Collect before you get forms from and submit data to Ona.

The video tutorial below demonstrates how to go about this process:

Downloading forms to your phone

After configuring ODK Collect to your Ona account, you can now download forms to your phone. You can download forms from projects you’ve created (are owner of) or shared with you and have been assigned Can Submit or a higher permission level on that project. Please read this blog post for more information on user permissions in ODK Collect.

Make sure you have internet connection before proceeding with the following steps:

The video tutorial below demonstrates how to go about this process:

Once you have downloaded forms to your device, you’re ready to start collecting data. Tap on Fill Blank Form and select the form you’d like to complete. 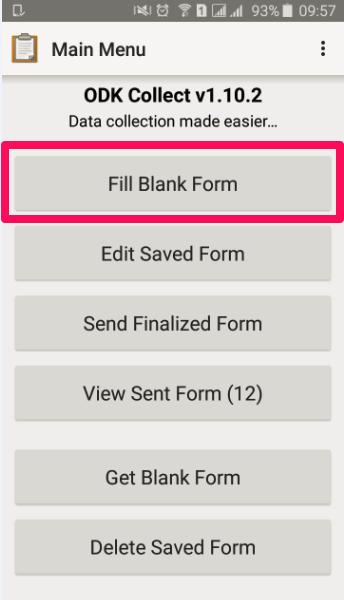 Once you have completed your survey, you can review and edit fields of your form to check for errors before saving. Tap on Go to prompt icon, scroll up and down to review all your responses. 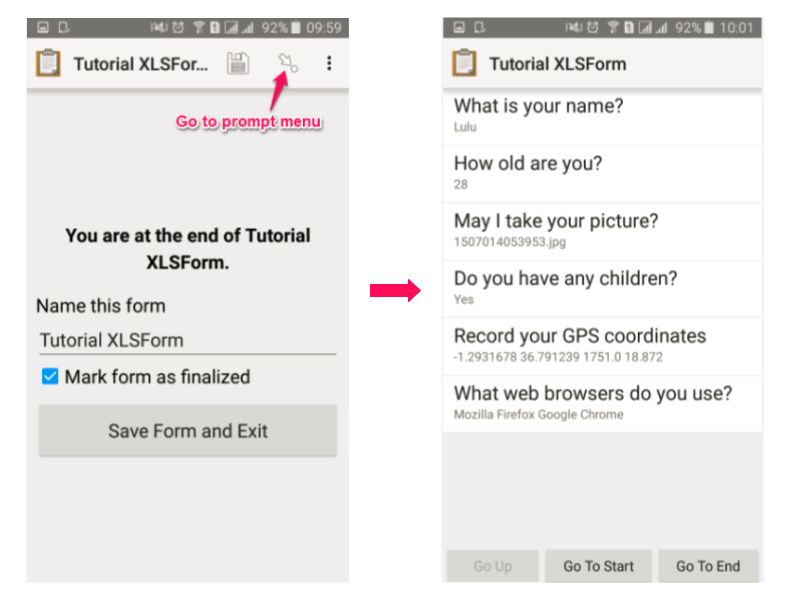 Note:
Use Go to prompt function at any time when filling your form to go to the end of the form.

Forms that are not marked as finalized are saved as drafts in the Edit Saved Form menu in ODK Collect. From the home screen in ODK Collect, you can see the number of saved draft forms in parentheses. 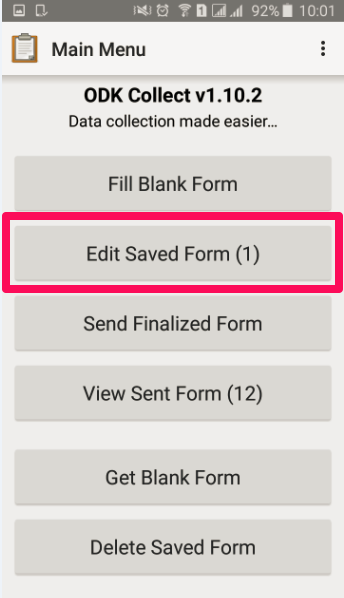 Tap on Edit Saved Form. You’ll see a list of your saved draft forms. You will also see any forms that were marked as finalized, but not yet submitted to the server. Tap on the name of the form you want to edit. Once you are finished editing your form, you again have the option to mark the form as finalized before pressing Save Form and Exit.

Once you have established an internet connection and are ready to submit your form to the server, tap on Send Finalized Form from the ODK Collect main menu. 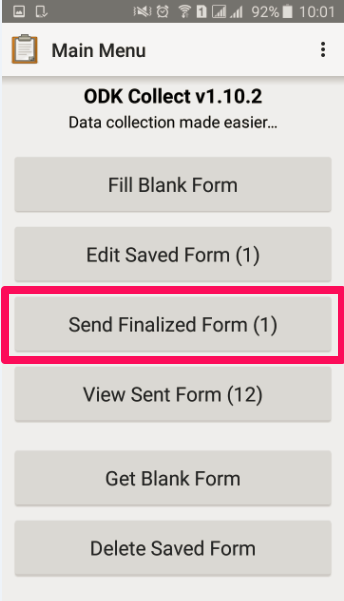 Check the form(s) you are ready to submit to the server and tap on the Send Selected button. 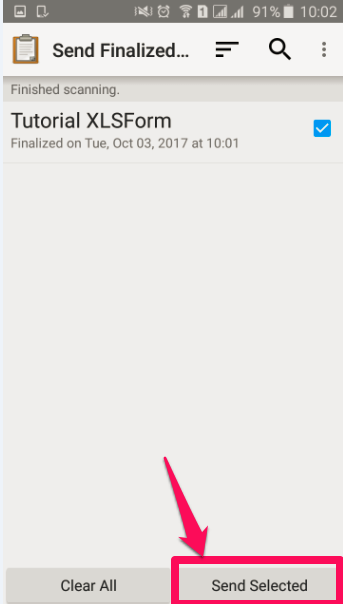 Upload results will pop-up in a window to show if the form has been successfully uploaded to the server. 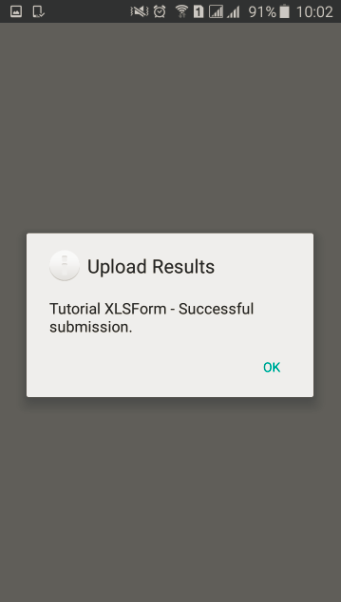 Note:
If you are having difficulties submitting your forms to the server, check your internet connection. For persistent connectivity problems, consider using ODK Briefcase, which can be used to extract form submissions from a mobile device without an internet connection.

Forms that have been submitted successfully are saved in the View Sent Form menu in ODK Collect. Tap on View Sent Form to see the forms you have submitted. Tap on the name of the form you want to view. You will see the responses entered in the form. 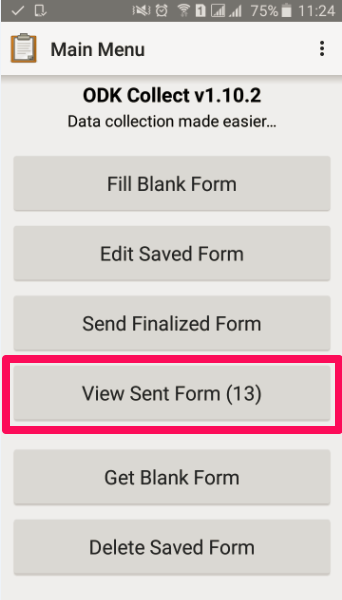 Deleting forms is done through the Delete Saved Form menu in ODK Collect. 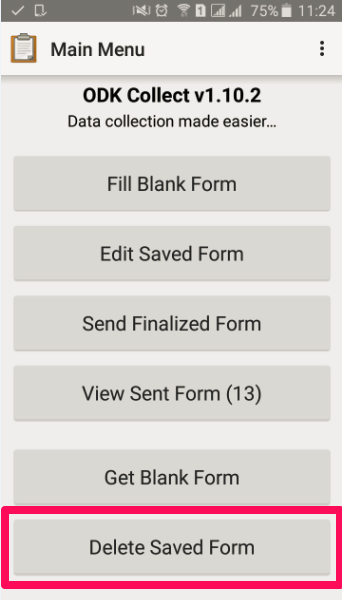 On the Saved Forms tab, you’ll find a list of all forms that were submitted to the server as well as all forms currently saved as a draft in ODK Collect. To delete each form instance, mark the checkbox next to the name of the form and tap Delete Selected. 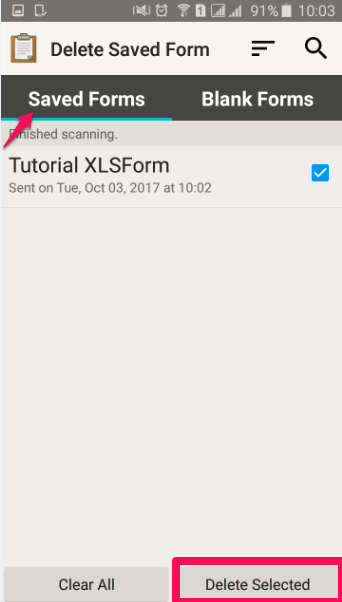 Note:
Deleting a form only deletes it from the phone; it does not delete the form submission from the server, if it was already submitted. Be cautious when deleting saved form drafts, as this cannot be undone. One can distinguish between saved forms and sent forms by reading the Saved on… vs. Sent on… date underneath the form name.

On the Blank Forms tab, you’ll find a list of all blank forms currently downloaded on your phone. To delete a blank form instance, mark the checkbox next to the name of the form and tap Delete Selected. 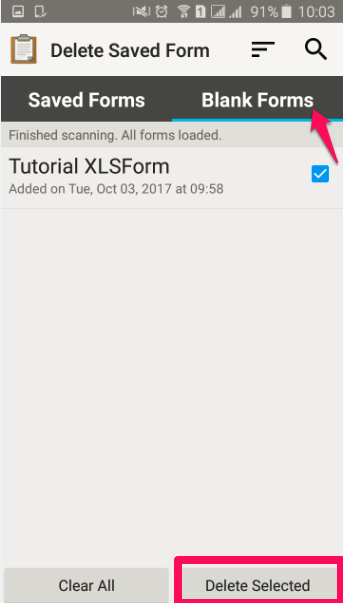 A dialog box will pop up prompting you to confirm the deletion; tap Delete Forms to continue.

The video tutorial below demonstrates how to View Sent Forms and Delete Forms.

It’s a good idea to delete an older version of a form before downloading a new version of the same form to your phone. This will help prevent users from opening and entering data in the wrong version of the form.

Note:
Once you delete a form, it will no longer be on your phone, you will lose it forever!

ODK Collect has a number of user settings that can be adjusted to better meet the context and needs of a project or simply a data collector’s personal preference. While this list is by no means exhaustive, we’ve found that the following features have been very useful for our users.

This feature enables you to automatically send finalized forms to the server as soon as there is an internet connection. This feature works even if you’re not currently using ODK Collect.

Once enabled, auto-send will attempt to send forms to the server automatically once they are marked as finalized and saved, essentially allowing the user to bypass sending the forms manually through the Send Finalized Form menu. If there is no internet connection, ODK Collect will retry sending the form at intervals until it succeeds.

To enable the auto-send feature, go to Settings in the ODK Collect main menu. Tap on Form management then tap on Auto send. Under the Auto send section, you can choose to auto send with Wifi only, Cellular only and Wifi or cellular. 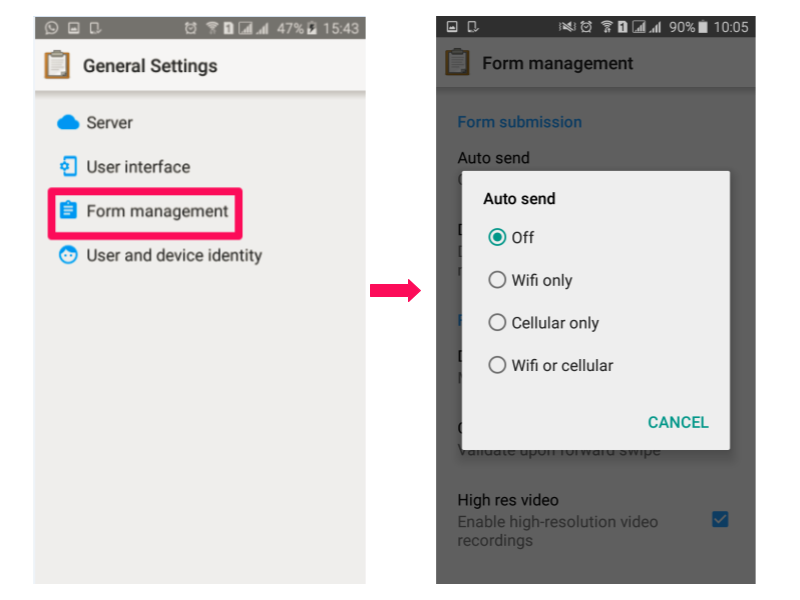 One can switch between swipes and forward/backward buttons or both for navigation.

To change your navigation settings from ODK Collect’s General Settings. Under the User Interface section, tap on Navigation, you can choose to use horizontal swipes (default settings), forward/backward buttons or swipes and buttons. 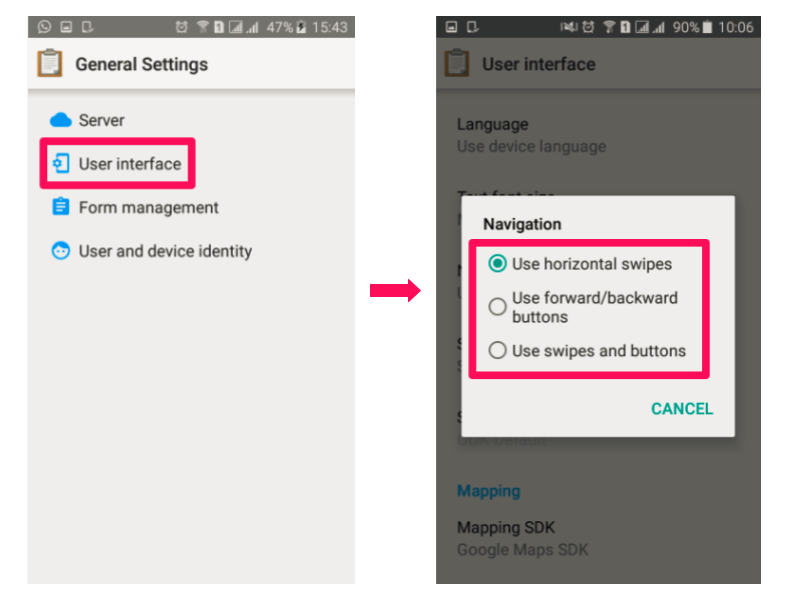 This feature makes it easier to configure ODK Collect on many devices with QR codes. Instead of configuring one device at a time, you can easily configure all the devices at once.

Note:
The barcode contains both Admin and server passwords. If you need to share settings in a public way, you can consider excluding passwords by tapping the bottom of the screen then leave the checkboxes next to each instance blank. 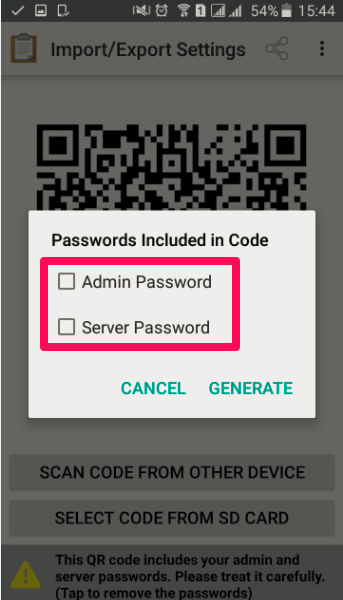